Is global warming real? That is probably a justifiable question given what I revealed in the last post about breakpoint alignment. But what I am going to demonstrate here and over the next two or three posts should also make you question everything you think you know about climate change. The first topic I am going to explore is a concept that most physicists and mathematicians are all too familiar with, but which appears to be totally off the radar of climate scientists: chaos theory and fractal geometry. 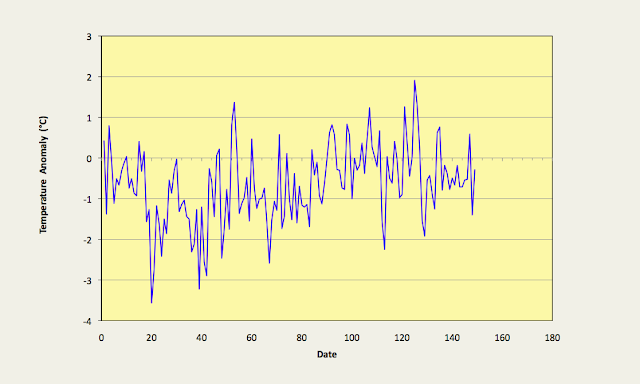 
First a test. Look at the dataset above (Fig. 9.1) and the one below (Fig. 9.2). Can you tell which one is a real set of temperature data and which one is fake? 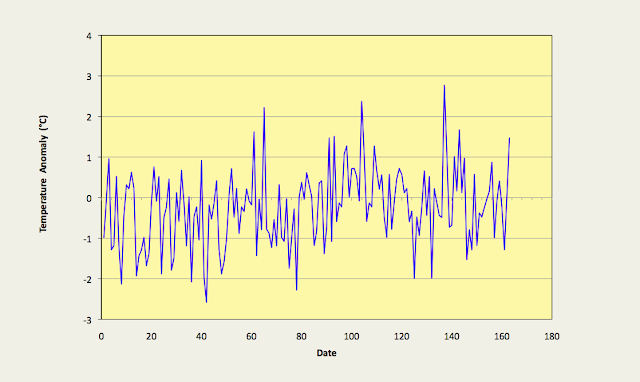 
Okay, so actually it was a trick question because they are both real sets of data. In fact they are both from the same set of station data, and they are partially from the same time period as well, but there is clearly a difference. The difference is that the data in Fig. 9.1 above is only a small part of the actual temperature record but the data from Fig. 9.2 is from the entire record. The data in Fig. 9.1 is taken from the Christchurch station (Berkeley Earth ID - 157045) and is monthly data for the period 1974 - 1987. The data in Fig. 9.2 is from the same record but for the time interval 1864 - 2013: it has also been smoothed with a 12 month moving average. Yet they look the very similar in terms of the frequency and height of their fluctuations - why? Well, what you are seeing here is an example of self-similarity or fractal behaviour. The temperature record for Christchurch is a one-dimensional fractal, and so for that matter is every other temperature record.

Self-similarity is common in nature. You see it everywhere from fern leaves and cauliflowers to clouds and snowflakes. It is observed when you magnify some objects and look at them in greater detail, only to find, to your surprise, that the detail looks just like a smaller version of the original object. This is known as self-similarity: the object looks like itself but in microcosm. It is also an example of scaling behaviour. There is usually a fixed size ratio between the original and the smaller copies from which it is made.

In order to make the smoothed data in Fig. 9.2 look similar to the original data in Fig. 9.1 two scaling adjustments were made. First the time scale on the horizontal axis in Fig. 9.2 was shrunk by a factor of twelve. This is to compensate for the smoothing process which effectively combines twelve points into one. The second was to scale up the temperature axis in Fig. 9.2 by a factor 12 0.275. The reason for the power of 0.275 will become apparent shortly, but it is important as it has profound implications for the noise level we see in temperature records over long time periods (i.e. centuries). 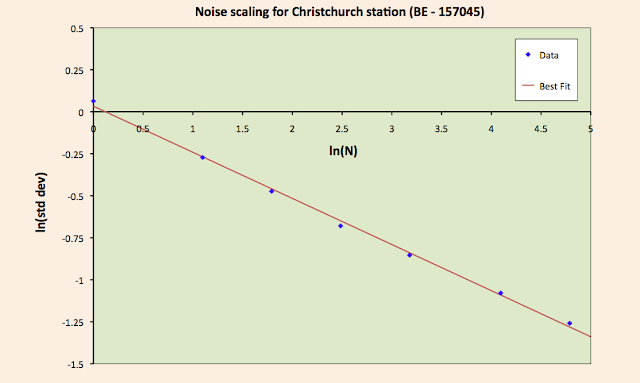 Fig. 9.3:  Plot of the standard deviation of the smoothed  anomaly data against the smoothing interval N for temperature data from Christchurch (1864-2013).


The important feature of the graph in Fig. 9.3 is that the data lies on an almost perfect straight line of slope -0.275 (remember that number)? I have to confess that even I was shocked by how good the fitting was when I first saw it, particularly given how imperfect temperature data is supposed to be. What this graph is illustrating is that as we smooth the data by a factor N, the noise level is reducing by a factor N-0.275. But is this reproducible for other data? Well the answer appears to be, yes. 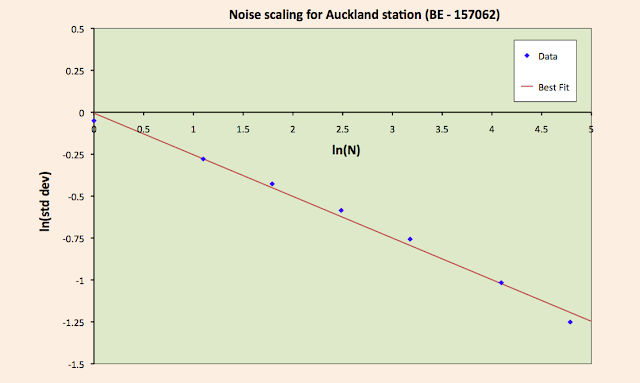 Fig. 9.4:  Plot of the standard deviation of the smoothed  anomaly data against the smoothing interval N for temperature data from Auckland (1853-2013). 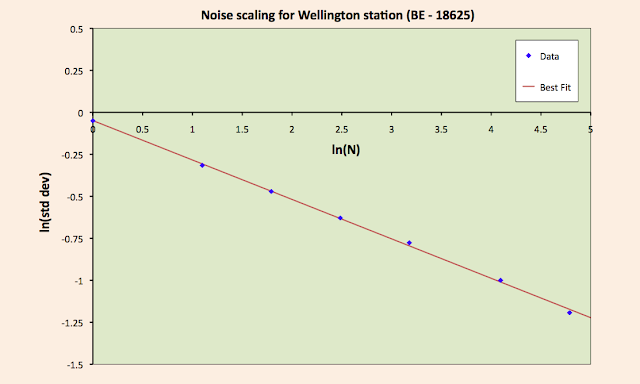 Fig. 9.5:  Plot of the standard deviation of the smoothed  anomaly data against the smoothing interval N for temperature data from Wellington (1863-2005).


But it is the implications of this that are profound. Because the data is such a perfect fit in all three cases, we can extrapolate to longer smoothing operations such as one hundred years. That corresponds to a scaling term of 1200 (because it is equal to 1200 months and thus is 1200 greater in period than the original data) and a noise reduction of 1200 0.25 = 5.89. In other words, the noise level on the underlying one hundred year moving average is expected to be about six times less than for the monthly data. This sounds like a lot but the monthly data for Christchurch has a noise range of up to 5 °C (see Fig. 9.6 below), so this implies that the noise range on a 100 year trend will still be almost 1 °C. Now if that doesn’t grab your attention, I have to wonder what will? Because it implies that the anthropogenic global warming (AGW) that climate scientists think they are measuring is probably all just low frequency noise resulting from the random fluctuations of a chaotic non-linear system. 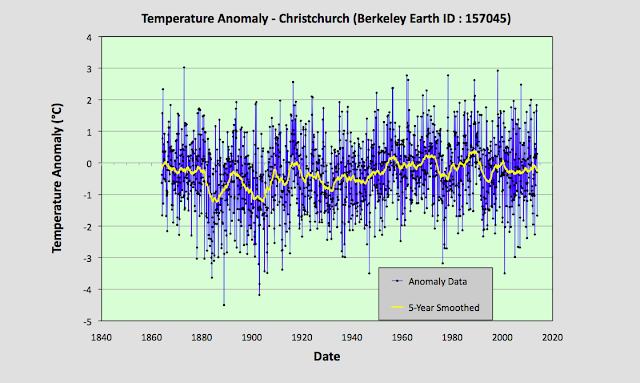 
What we are seeing here is a manifestation of the butterfly effect which, put simply, says that there is no immediate causal link between some current phenomena such as the temperature fluctuations we see today and current global events. This is because the fluctuations are actually the result of dynamic effects that played out long ago but which are only now becoming visible. 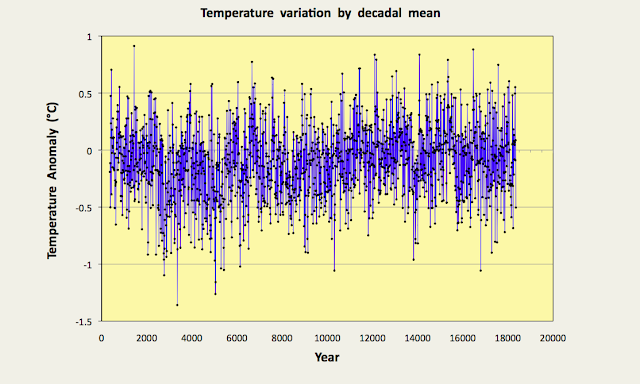 Fig. 9.7:  Typical mean station temperatures for each decade over time.


To illustrate the potential of this scaling behaviour further we can use it to make other predictions. Because the temperature record exhibits self-similarity on all timescales, it must do so for long timescales as well, such as centuries. So we can predict what the average temperature over hundreds of years might look like (qualitatively but not precisely) just by taking the monthly data in Fig. 9.6, expanding the time axis by a factor of 120 and shrinking the amplitude of the fluctuations by a factor of 120 0.25 = 3.310. The result is shown in Fig. 9.7 above. Because of the scaling by a factor of 120, each monthly data point in Fig. 9.6 becomes a decade in Fig. 9.7. The data in Fig. 9.7 thus indicates that the average temperature for each decade can typically fluctuate by about ±0.5 °C or more over the course of time. 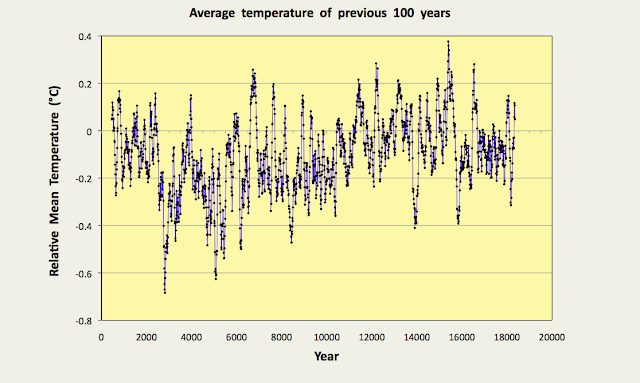 
Then, if we smooth the data in Fig. 9.7, we can determine the typical fluctuations over even longer timescales. So, smoothing with a ten point moving average will yield the changes in mean temperature for 100 year intervals as shown in the graph above (Fig. 9.8). This again shows large fluctuations (up to 0.5 °C) over large time intervals. But what we are really interested in from a practical viewpoint is the range of possible fluctuations over 100 years as this corresponds to the timeframe most quoted by climate scientists.

To examine this we can subtract from the value at current time t the equivalent value from one hundred years previous, i.e. ∆T = T(t) - T(t-100). 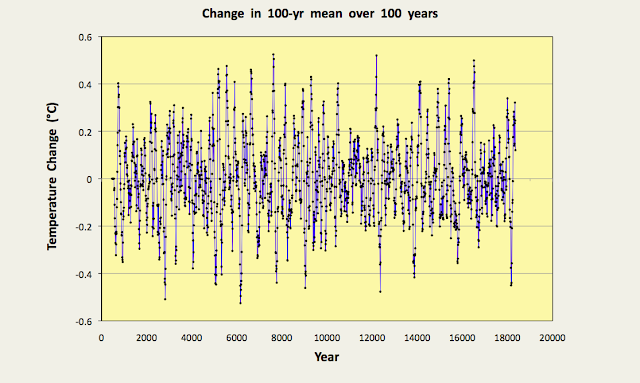 
So, as an example we may wish to look at the change in mean temperature from different epochs, say from one century to the next. Well the data in Fig. 9.9 shows just that. Each data point represents difference between the mean temperature over a hundred years at that point in time with the same value for a hundred years previous. Despite the large averaging periods we still see significant temperature changes of ± 0.25 °C or more. However, if we compare decades in different centuries it is even more dramatic. 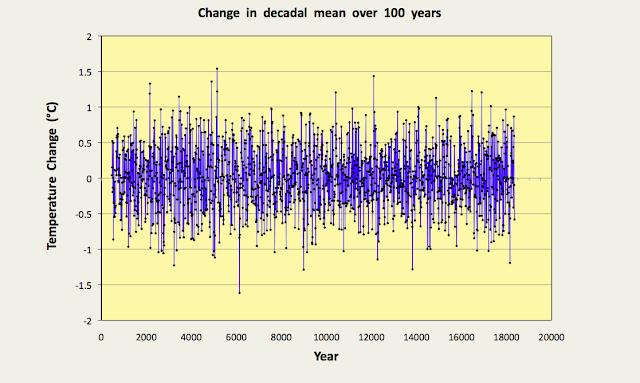 Fig. 9.10:  Typical change in mean decadal temperature for a time difference of 100 years.


So why have climate scientists not realized all this? Maybe it's because their cadre comprise more geography graduates and marine biologists than people with PhDs in quantum physics. But perhaps it is also due to the unique behaviour of the noise power spectrum.

This in turn means that P(ω) has the following linear form up to the cutoff frequency ωo. 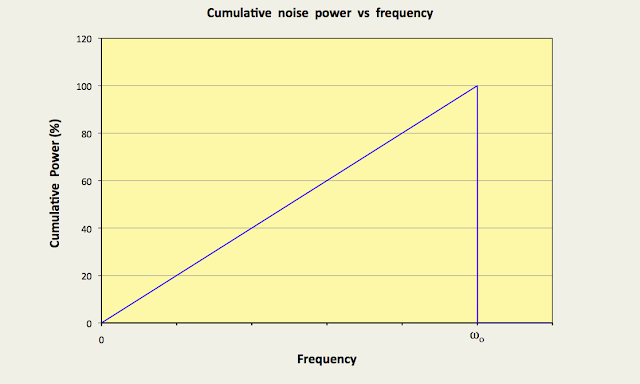 For a 100-year smoothing the scaling factor compared to a monthly average is 1200, and so the noise will therefore reduce by a factor of 1200 0.5 = 34.64 . That means the temperature fluctuations will be typically less than 0.1 °C. This is probably why climate scientists believe that the long term noise will always be smoothed or averaged out, and therefore why any features that remain in the temperature trend must be "real". The problem is, this does not appear to be true.

Instead the standard deviation varies as N -0.25. So the intensity of the noise varies as N -0.5 and P(ω) will increase as √N. It therefore follows that the power spectrum is not independent of frequency as is the case for white noise, but instead varies with frequency as 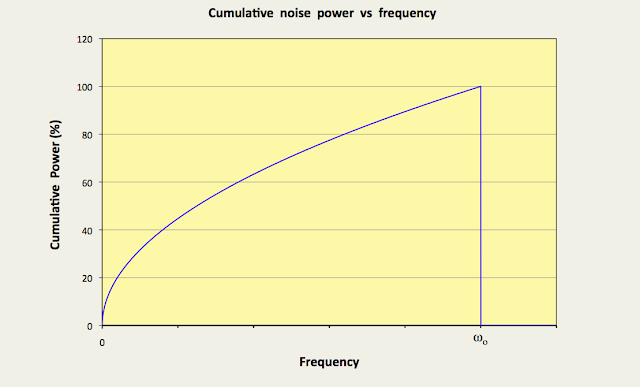 
The net result is that the random fluctuations in temperature seen over timescales of 100 years or more are up to six times greater in magnitude than most climate scientists probably think they will be. So the clear conclusions is this: most of what you see in the smoothed and averaged temperature data is noise not systemic change (i.e. warming). Except, unfortunately, most people tend to see what they want to see.

Posted by The Climate Detective at 9:07 AM

The Climate Detective
Physicist, socialist and environmentalist (not necessarily in that order).